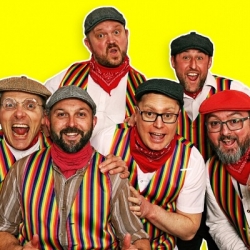 Since the very sad and untimely passing of founder member, Willy Eckerslike (Tom McGrath), the stiff-upper-lips (or should that be chips) and Northern spunk (stop giggling) has joined forces in the ranks of The Lancashire Hotpots, because the lads have been back on the road, revealing their "Criminal Record" to all and sundry. As we rather like the cheeky chappies, we're rounding up some live news for you, including an unlikely festival appearance coming up in August.

Firstly though, the lads have a couple of warm-up gigs for Kendal Calling, beginning with Lancaster's Grand Theatre on 30th July and the Sale Waterside on the 31st - tickets cost £12. The band then performs at Kendal Calling on the Sunday (1st August) - tickets are still available at £36.50 for the whole day, also starring The Coral, Badly Drawn Boy and These New Puritans amongst others.

The Hotpots then have a series of club dates all booked, but not before playing at the 97.4 RockFM Live day fest on Sunday 15th August. A curious line-up of McFly, The Saturdays and Professor Green is not the usual company associated with the flat-capped comedians, but hey, if it helps them sell more copies of "Chippy Tea", who cares - it's sold-out as well. Back to the club dates and Nuneaton, Leicester, Cambridge, Sheffield, Blackburn and York all host further madness until their return to the capital on 20th November at the Bull and Gate, Kentish Town. The lads sold out the venue last year - you can still read the review by clicking on the link to your right - tickets cost just £9.

Their recently postponed Burnley gig takes place on 26th November, followed by the newly-announced Manchester on 4th December and Preston on the 18th - keeping it Northern and keeping it around £12!