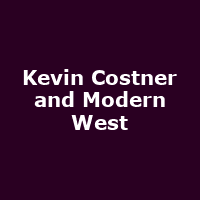 When this event spewed out of the ticket tele-printer, I thought I was on an episode of "Would I Lie To You?". 'Where's Rob Brydon', I thought, 'or Lee Mack'. But no, 'tis true, actor Kevin Costner really has been singing country-music for a few years now, at the behest of his wife.

After a few world-wide tours, he and his accompanying sextet are becoming quite a force in the genre. They have released two albums with a varying degree of success - their first "Untold Truths" appeared in 2008 and hit the US Country charts, while the second "Turn It On" has been a hit around Europe, including Greece for some reason. It's a very different world to "Bodyguard" and "Bull Durham".

Mr Costner and his band The Modern West will play just one date in the UK this year, at London's KOKO venue on 16th September. Tickets go on sale at 9am on Friday, costing Â£25. If you want a taster of the Costner-crooning, then click on the link for the song "Let Me Be the One", featuring the rather dulcet tones of Sara Beck.

Kevin Costner's next film is "The Company Men", which co-stars Ben Affleck and Tommy Lee-Jones and concerns a successful businessman who loses his job, only to be offered a job as cavity-foam installer with his brother-in-law.