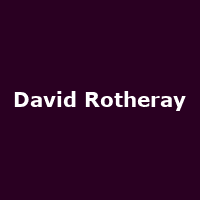 Of course I should have inserted the prefix-word 'ex' in front of The Beautiful South because David Rotheray left the chart-topping band some time ago having opted out of joining New Beautiful South and The South (the two later incarnations). Instead, the guitarist has been working with Sam Brown under the guise of Homespun (which he was doing as a side project to his hit-making contributions, however after a change of vocalist from Brown to Helen McRobbie, he has plumped for the solo-life - well, almost.

His debut solo-album is due for release on August 16th and features several collaborations with a considerable roster of folk luminaries such as Eliza Carthy, Kathryn Williams, Eleanor McEvoy and Alasdair Roberts. Called "The Life Of Birds", the songs within deal with all form of human emotion with an ongoing theme of all things winged. There'll be a review of the album up soon, but meanwhile there is the small matter of a tour to mention.

You can be sure of plenty of quality strum n grace from the man who co-wrote "Song for Whoever" and "A Little Time" back in the 90s.