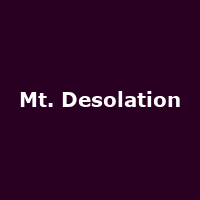 Yes sorry about the pun in the headline but it was just too good an opportunity to miss - y'see, Mt. Desolation is a bit of a super-group of other super groups, truth be told. There's messrs Rice-Oxley and Quin from Keane for a start, plus Vanucci from The Killers and a host of other capable musicians, all coming together for a spot of Americana, roots and acoustic strumability that might make you all cosy inside as the summer nights disappear and the grumpy autumnal days close in.

After many long nights and heady sessions, the band has a new debut album ready for aural-perusal, due for release in October but, before then, a lengthy September tour has been confirmed. They certainly fancy Scotland, although the first stop is Belfast on the 9th, then Dublin (10th), Nottingham (12th), Birmingham (13th), Newcastle (14th), Glasgow (15th), Inverness (16th), Stornoway (17th), Ullapool (18th - Loopallu Festival), Fort William (19th), Tobermory (21st), Dundee (22nd), Aberdeen (23rd), Leeds (24th), Manchester (25th), London (27th) and finally Brighton (28th). Tickets go on sale on Friday at 9am, priced from Â£10 upwards.

If you are curious to hear what the tunes are like, Mt. Desolation have kindly loaded one track onto their My Space page (www.myspace.com/mtdesolation) - "State Of Our Affairs" is rather tasty.