We are Scientists, we are touring - the Barbarians tour hits the UK in November 2010 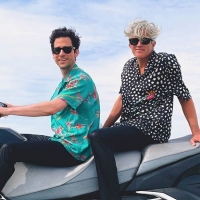 New York indie-rockers We Are Scientists are a bunch of cheeky wags aren't they? Hop over to their My Space page and check out their World Cup song, "Goal England" - I'm sure it's a p*sstake. Or maybe not, maybe they really were singing for Engerland. They'll certainly be singing IN England pretty soon as the rousing quartet return to these shores in November for a tour.

Recent album "Barbara" is the inspiration behind the tour's title, "Barbarians", and will no doubt feature as part of the set-list including the recent single "Nice Guys". Although the album missed out on a Top 40 showing, tickets will sell quickly for a band notorious for their energetic and ferocious live performance, recently featuring ex-Razorlights' drummer Andy Burrows at some of their dates.