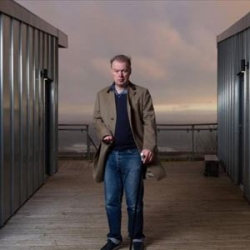 Ever since bouncing onto our TV screens as lead-singer with the jangly-pop band, Orange Juice, in the 80s with "Rip It Up", Edwyn Collins has gained many admirers for his impassioned and soulful-songwriting, either with his band or, latterly, without. His career has been chequered - commercial success cruelly evaded him after going solo in 1985 until "A Girl Like You" flooded the airwaves in 1994. Finally Radio One started to listen, albeit briefly, and things looked up for a while until a major health scare in 2005 hospitalised him.

Although Collins is still recovering, he continues to edge his way back to excellent health with albums, illustrations (a keen bird-watcher) and occasional dates and us lucky Londoners are being treated to three appearances in the coming weeks.

His first is at the Shoreditch Park Apple Cart Festival (with Gilles Peterson and Lambchop) which is sadly sold out but the 100 Club gig on 11th August is well and truly up for grabs at £18.50 per ticket. His third gig will be a special album launch night at the Queen Elizabeth Hall on 23rd September, priced between £18 and £22 plus usual fees. Special guests are expected to appear at the latter concert, and when you see the album details, you might raise an expectant eyebrow.

The album appears on 13th September and is entitled "Losing Sleep", a 12-track set that includes contributions from Johnny Marr, Roddy Frame, Romeo Stodart and Alex Kapranos. The title track will appear as a single in August. It'll be interesting to see who turns up at these concerts!