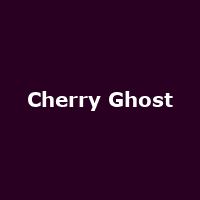 It looks like Simon Aldred is getting nicely settled into the mid-sized venue circuit with the announcement of a handful of October gigs, beginning with Nottingham on the 3rd, Leeds (5th), Sheffield (7th), Birmingham (8th), Liverpool (10th) and finally (for now) Manchester (15th). Tickets are on sale now, priced between Â£10 - Â£12.50.

The band will visit London prior to this tour, starting with an appearance at the Ben and Jerry Sundae Festival on Sunday (of course), though whether the ice-cream company have come up with a flavour befitting of the band remains to be seen. I propose a cherry-choc arrangement with added lumps of white meringue and white marshmallows - Cherry Ghost, geddit? [or add croutons for ... Cherry Toast? - Ed].

Suit yourselves, and while you do just that, I'll move on to their next London date at Dingwalls on 15th September - tickets are still available for Â£12.50 plus fees, a bargain price for a band that has just chalked up its second Top 40 Album hit with the excellent "Beneath This Burning Shoreline", an earnest set of songs highlighted by the all-involving single "Kissing Strangers". He's got an ear for a melody, has our Simon.