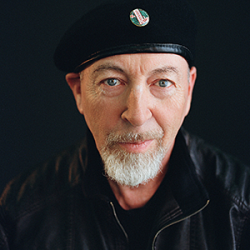 He is often termed as a 'folk troubador', 'distinguished songwriter' and a 'national treasure', descriptions that may appear clichéd but are, for once, a reasonable analysis of Richard Thompson. He is also a very accomplished guitarist having recently won the 2010 Mojo Honours List Les Paul Award - well, having played one for a while in his earlier days before hitting the Stratocasters, it seemed only fair. Thompson's career has traversed over four decades, including several years with Fairport Convention and his ex-wife Linda - successful times indeed.

His solo career has been no less fascinating and 2010 is set to be another busy year, with the triumphant curation of this year's mammoth Meltdown Festival already under his belt. Now it's a bit of 'me' time for Richard with the announcement of "Dream Attic", a brand new album due for release on 30th August. This new collection will appear as a limited double-disc set of finished band versions coupled with a disc of demos from the same writing sessions, basically an acoustic reading of the entire album.

At first listen, the 13 songs sound very 'live' (they will do - an audience was invited to appear at the recording session), especially the tongue-firmly-in-cheek synopsis of the financial markets, "The Money Shuffle", with others such as "Here Comes Geordie" and "Demons In Her Dancing Shoes" telling observational stories in his usual inimitable way. A full review will appear here very soon.

Prior to the band tour in 2011, Thompson also appears with Early-music guru Philip Pickett and Musicians Of The Globe Theatre for a performance of Shakespearian legend and song at London's Cadogan Hall on 6th December - there are a few tickets left at £35. Please note this is NOT a band performance so expect lutes, viola, bandore and citterns a-plenty.