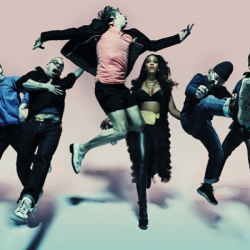 They hail from New York and, to make a point, they called themselves !!! (or chik chik chik, or chk chk chk - gaah!!!). The American clubby-electro-rock outfit used to cause considerable arguments at our Virgin Megastore as to where to file their CDs on the racks instore - in the end, we stuck them in 'Rock Pop' prior to the letter A.

Nowadays, there aren't so many record and CD shops about and Chk Chk Chk have sold enough albums to warrant continued adulation from loyal fans, not least the 2004 collection "Louden Up Now", released on Warp. The band are still on the Sheffield-imprint and are set to release their fourth studio album in the form of "Strange Weather, Isn't It?"on 24th August, their first for three years. Just prior to this, a 12" clear vinyl of "AM/FM" and "The Hammer" hits the shops and if you fancy a listen, check out the player to the right / above / below* for a snippet of "The Hammer" which, to these ears, takes over from where LCD Soundsystem have left off.

Further to this activity is the announcement of a short tour, taking in Manchester, Bristol and London (so far) from 29th October. Tickets go on sale at 9am on Friday 23rd July, priced at £13 plus fees.