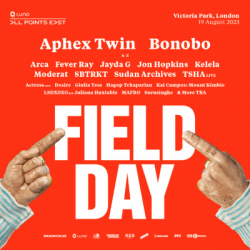 A name you might not know, but a sound you certainly will recognize. Firmly-rooted in the hazy days of 80s electro-soul and keyboards wielded like lead-guitars, Dâm Funk's take on boogie-funk is reminiscent of Prince in his "Paisley Park" heyday or early Brit-soul acts like Loose Ends and 52nd Street, given a 21st-century twist. His 2009 album "Toeachizown" (or to break that down a little bit, 'to each his own') has been hailed as a 'promising new chapter in West Coast space-funk' and they could well be right. Check out the video for the near-instrumental track "Mirrors" to see what I mean.

He has recently collaborated with soul-icons Jody Watley and Steve Arrington during live sets in the States - names that should give you an idea of where this producer and remixer is coming from. Damon Riddick (to give him his full name) has announced a rare solo set to be performed at London's KOKO venue on 4th September and tickets are just £10 plus fees, a considerably low price for a night that will also include special guests into the early hours. This price is an EARLY BIRD price only so be quick!

In addition to this show, the funkster will also be appearing at London's Field Day 2010 on 31st July (on the Blogger's Delight stage) - tickets still available at £33 - and The Big Chill festival on 8th August.