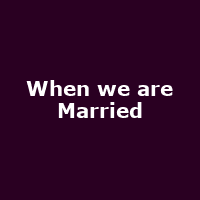 When we are Married

The Garrick Theatre in London is all set to stage a major comedy-drama production throughout the autumn (and some of winter), with the impending arrival of two of the UK's most-beloved comedy-actors, due to front a new adaptation of J.B.Priestly's amusing "When We Are Married".

Maureen Lipman began her sparkling career in theatre, in particular The Old Vic, before appearing in several TV comedies including "Doctor At Large" in the early 70s. After appearing as 50s comedian Joyce Grenfell in "Re:Joyce", she struck gold with an advert series on TV - the BT commercials featured Lipman as a fussy grandmather (Beatie - see what they did there?). Now she will team up with another 'national treasure', Roy Hudd who is most famous for his appreciation of music-hall and vaudeville, as well as a regular voice on Radio 2's "News Huddlines", a pre-cursor to "Have I Got News For You".

They seem like an ideal pairing for Priestly's play which concerns the lives of three couples, all celebrating their silver-wedding anniversaries at a social gathering. It emerges that, due to an error at the churches 25 years ago, none of them is married at all. Comedy chaos ensues, followed by the realization that they have tolerated each other for so long.

The performances begin on 19th October and continue right through Christmas until 26th Feb 2011. Tickets are on sale now and cost from Â£20.90 up to Â£53, depending on seat location.