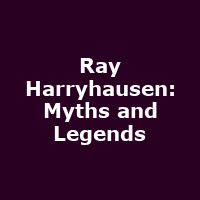 Possibly the most forward-thinking and innovative of film-producers and special-effects wizards, Ray Harryhausen, recently opened a brand new exhibition at London's Film Museum. Entitled "Myths and Legends", the exhibition showcases the most famous creations by this remarkable contributor to modern cinema. Frankly, without Harryhausen's so-called "Dynamation" (or 'Stop-start' animation), Doctor Who might have been based in a hospital, not a time-machine surrounded by Daleks and Cybermen. OK, perhaps that's a bit glib - but it might not have been so terrifying (for its time). "Star Wars" certainly drew inspiration from the great man, who has just turned 90 (coincidentally the subject of a previous attraction here at the same venue some years back).

His key works include the films based on myths and legends, including "7th Voyage Of Sinbad", "The Golden Voyage of Sinbad", "Jason and the Argonauts" and "Clash of the Titans". His creations were a mixture of 'live' action figures 'touched-up' with grim, sometimes dead scary, features and mannerisms - check out "Jason" with the sword-fighting skeletons, "The Beast From 20,000 Fathoms" with a city-crunching dinosaur called a Rhedosaurus and the gruesome and sinister Medusa character from "Clash of the Titans".

Many of the figures and creatures are here at this expansive display until June 2011, with tickets now on sale priced at Â£12.50. Please note that admission also includes one visit to the Charlie Chaplin Great Londoner exhibition being held in the same venue - bargain! Bear in mind that, from next June, the exhibits will be given a permanent home at the National Media Museum in Bradford.