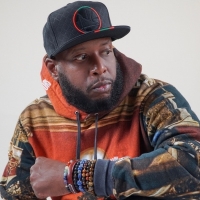 The Roundhouse in Chalk Farm will soon be playing host to a rap-spectacular with a difference. "Lyrical Alliance" is the umbrella project name for an event featuring several hip-hop vocalists from the Middle-East, as well as a real purveyor of conscious-roots rapping who has, for me, recorded one of THE hip-hop albums to rank alongside works by KRS-One, Eric B & Rakim, Public Enemy and EPMD.

Set to take place on 16th October, DJ MK (famed for his work with Dizzee Rascal and Kiss FM) will host an evening of inspirational verbiage and tight beats from none other than Talib Kweli, a Brooklyn-born legend who has continued to pave the way for intelligent and reasoned lyrics and rhymes, without resorting to idle boasts and gun-thuggery. His collaborations with acclaimed DJ Hi-Tek, have been set in stone as a template for other rappers to aspire to, particularly the "Train of Thought" set in 2000. When Rawkus' suffered its initial demise, he moved on to Warners and continued to write crisp, sharp lyrics although now he is back with another Hi-Tek project ("Revolutions Per Minute").

Tonight though is all about the lyrics and Kweli will perform in the second half of the show, as well as the finale with all of the other rappers which includes Lebanese wordsmith Rayess Bak and VJ Jana Saleh, Palestinians Shadia Mansour and Tamar Nafar, Algerian Rabah Donquishoot and Jordanian Samm. Of all of the talent on offer, you may be most familiar with Mansour who is one of the leading Arabic MCs and has 'previous' with Mobb Deep and Busta Rhymes as a supporting act.

Tickets for the entire evening cost just Â£22.50 plus fees - that's about Â£4 per performer!