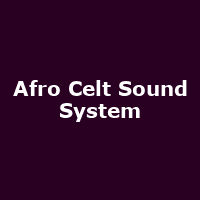 Some acts and bands are hard to pigeon-hole, which occasionally begs the question 'why do it then?'. Good point, although it does help explain the sound, influence and direction of an artist and ultimately keeps the wheels on the good-fortune wagon rolling along, picking up new fans along the musical journey. Oh it also helps to sell CDs and tickets and Afro-Celt Sound System have certainly done that over the past 15 years, mixing folk, world-music and bouncy-techno-rave beats into the sound-bucket.

Their long-running and innovative record-label Realworld has announced that the afore-mentioned bucket is about to be stirred and rummaged through for an excellent Afro-Celt Sound System compilation, due for release on 6th September. The album, entitled "Capture", covers their 5 studio albums and divides songs onto one disc and instrumentals onto the second disc. Their vocal collaborations include Robert Plant (very timely considering his intentions this autumn), Peter Gabriel, Sinead O'Connor and many more, some from the RW roster including Iarla O'Lionaird. You will have heard their instrumentals dotted all over the airwaves at festivals if you have ever been to one, on TV idents in the 90s if not.

The ensemble has also been a staple-act of WOMAD for several years and one of their upcoming dates involves that very festival on 25th July, as well as HebFest (in the Hebrides, no less) on 15th July, Shrewsbury Folk Festival on 29th August and a special appearance at the Barbican, London on 2nd November. Tickets for the latter are available now for Â£25 plus fees. You'll have a 'Whirl-Y-Reel' of an evening (to quote a title of theirs).

We may even have a signed copy or two to offer in a competition... watch this space...