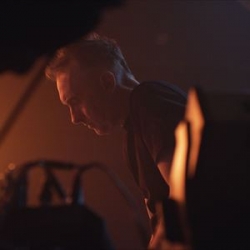 Some of you may well be familiar with the charming French comedy-drama, "Amelie", the tale of a teenager who charms everyone she meets and changes their outlook on life with her cute smile and boundless, innocent aura. The music in the film was as memorable as the plot and was written by the composer Yann Tiersen. Now you may be wondering what else the man has written - um, quite a lot actually.

He claims to have been influenced by 'post-punk' and 'new-wave', which could certainly explain song titles like "F*** Me" and moody workouts like "Western". But much of his material is also aligned with Michael Nyman, Wim Mertens and the Penguin Cafe Orchestra, utilizing the sounds of strings, piano and a good old dose of folk-music to boot. He has scored other films and plays yet has achieved fame in France through rock and pop collaborations with members of Tindersticks and Cocteau Twins. Check out the album "Les Retrouvailles" from 2005, with its eerie coda and chilling Liz Fraser vocals. You can see where bands like Broken Records get their intensity from.

His new album "Dust Lane" is due for release, supported by plenty of dates around Europe including the UK. He will play Leeds on 28th October, followed by Manchester (29th), Bristol (31st), Portsmouth (1st Nov), Oxford (2nd), Nottingham (7th), Birmingham (9th) and finally Cambridge (11th). Tickets are up now, priced £15.

Expect a mix of English and French emotional rock and pop, charged by Tiersen's electric guitar riffs and pretty arrangements.