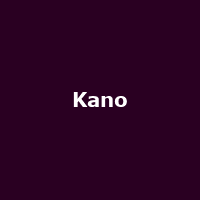 Very much a part of the UK grime-scene, Kano has released an impressive array of mix-tapes, singles and albums, with another set to follow later in the year. His biggest success so far has been 2007's "London Town" set that spawned his big hit "This is the Girl" (with Craig David) and a label-change in 2008 has seen a more specialist fan-base stick with him. However an appearance on Chase and Status' "More than a Lot" has brought him a new audience and suddenly it seems you can't keep a good Kano down. He has also appeared on the Gorillaz latest opus, "Plastic Beach". The track "White Flag" [not a Dido cover, Dido fans... - helpful Ed] was performed with another UK rapper, Bashy.

He will release a new album "Method to the Maadness" in August, just prior to a few UK dates, the first of which is available to buy now, a launch party at Bush Hall in West London on 1st September, tickets are just £15 plus fees. Later in the same month, Kano heads to Glasgow (25th), Leeds (26th) and Manchester (28th) with tickets going on sale on SATURDAY at 10am, priced at £12.50.

A new single "Upside" will precede the album on 23rd August, featuring vocals by Michelle Breeze and sees Kano deviate towards out-and-out hip-hop and electro. Other guests on the album include Hot Chip (!), Chase and Status and Damon Albarn.