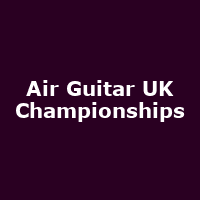 If you're up for a laugh, then this might well sort you out: in July and August there is not one, but two separate "air guitar championships" finals.

First up is the "UK Air Guitar Championship", now in its fifth year, which takes place at the O2 Academy in Islington on Friday 6th August. This will be an opportunity to relish the sight (expect clichÃ© head banging and over-the-top grimaces) of savvy nutters and gimmick geeks doing their best impression of some the world's greatest guitar heroes, strumming and finger-picking the air!

Also, should you be willing to enter the competition and impress with your virtual dexterity, fill in a form on www.airguitaruk.com ..., And, while one would expect, the UK AGC to only attract big hairy hunks, the competition is open to anyone and everyone, including chicks - yeehaa! Tickets are on sale now and cost a tenner each.

The finals of the "Official UK Air Guitar Championships" [they both cling to the word "Official", so don't be fooled by wording - I'm not sure any of them are more official than the other - Ed] also take place in London, but at the Relentless Garage on Saturday 24th July, with tickets costing a familiar Â£10.