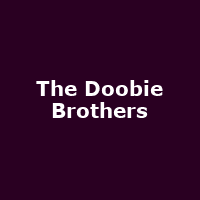 Naming your band after a cheeky 'joint' between meals is potentially trouble enough, you might think, but internal wrangling and a 'staff-turnover' higher than those at BP right now, is enough to make most people give up and go back to painting and decorating. Not so with The Doobie Brothers. Many would argue that the band's greatest era featured Michael McDonald, although it could certainly be agreed this was their biggest crossover period. But their entire catalogue is worth a listen, in places - "What a Fool Believes", "Long Train Comin'", "Minute By Minute", "Listen to the Music" and "Takin' it to the Streets" are all worthy anthems of a soul-country and soft-rock variety.

Occasionally the band reforms and 2010 is no exception, along with a continual and extensive revisit of their catalogue albums. With founding members Tom Johnston, Patrick Simmons and 70s players John McFee and Michael Hossack very much back in place for some time, The Doobie Brothers have announced a special London show on 29th October at the Hammersmith Apollo and tickets will be on sale on Friday at 9am, priced at Â£39.50.