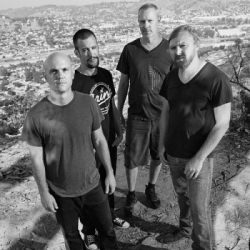 Those lazy, hazy days of 'Grunge' are long gone, during which many bands came and went, never to be seen again. Many bands found their way onto majors (Alice In Chains, Pearl Jam et al) and lived either a charmed life or a very stressed one. Tired of long-hair and leathers in metal, Helmet formed to kick against the very people who themselves thought they were doing the kicking. Opting for short hair, trainers and denim shorts, Helmet had more in common with Fugazi than Nirvana, despite joining Interscope (Part of Warners) and delivered a few cracking albums in the 90s - "Strap It On", "Meantime" and "Betty" (just recently reissued) are worthy examples of intelligent metal and rock. No frat boys here.

After some years since their last album (2006's "Monochrome"), Page Hamilton and the boys are back with a brand new set of songs, due to be released in September. To be entitled "Seeing Eye Dog", the album sees Hamilton take the reins with purpose (he plays many of the instruments and produces much of it) although it will be very much a Helmet album with plenty of 'mosh' included.

To prove the case, Helmet is back in the UK for just one date (so far) at London's Scala on 15th December with tickets on sale now, costing £17.50.