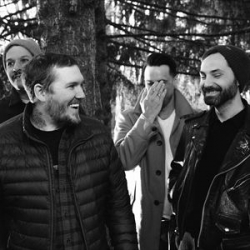 Heads-down, no-nonsense and purveyors of raucous punky rock-n-roll, that's The Gaslight Anthem in a nut-shell - oh yeah, not forgetting a good deal of hard-work in getting to the point where they are today. They've just finished a run of dates so what do they go and do? Feet up and a crate of Miller's finest? Let's hope not, it'll play havoc with their colons - no folks, the US-rockers have announced another pile of concerts in support of their recent album and new single "Boxer".

Recent album "American Slang" has continued where the successful "The '59 Sound" left off, providing the band with plenty of festival dates to play, including the upcoming Reading and Leeds bashes. New single 'Boxer' is due for release on August 9th and you can do your bit to show support (or proffer free advertising, depending on your viewpoint) by visiting sideonedummy.com/american_slang/ and using it to generate a new Facebook/ Twitter/ Myspace/ blog profile picture, you'll then need to email the guys at SideOneDummy the page to show off your creation - and in return you'll receive an acoustic version of 'Boxer' as a download. Or you could just get ready to click on Friday morning!