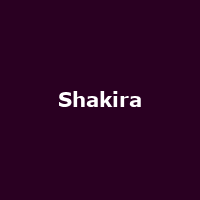 She's a singer, she's a dancer, she's a songwriter, she's Columbia's finest export (as well as their coffee), she's Shakira and she is about to re-appear on our shores this winter with a few special arena dates, just confirmed.

The lady will begin her jaunt here in December, as part of a global tour, beginning in Manchester (MEN Arena - 14th), Dublin (O2 Arena - 16th), Belfast (Odyssey Arena - 17th), Glasgow (SECC - 19th) and London (O2 Arena - 20th). The London date goes on sale on Friday 2nd July at 9am, Dublin and Belfast go on sale on Wednesday 7th July at 9am and finally Manchester and Glasgow get released on the following Friday (the 9th) at 9am.

Shakira has played an important part of the World Cup, despite Colombia's inability to even qualify (a bit of a shame, they are usually good entertainment for their footballing skills, antics and crazy hair - remember Valderama?). She provided the Official FIFA World Cup theme "Waka Waka" for the South African tournament, utilising a traditional Cameroon soldier's song already made popular in her home nation a couple of decades before - after some recent refereeing blunders, perhaps she could have also covered Tim Buckley's "I Must Have Been Blind". Only kidding Sepp.

As well as this new song, she has a new album due out in September, opting for a more Latin-flavour than recent efforts. It is expected to be called "Salio el Sol", hinting at a language change from her last pop-set called "She Wolf" and her last huge number ones in 2006, "Hips Don't Lie", and 2007 "Beautiful Liar" (with Beyonce).