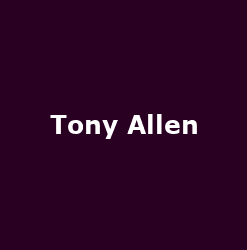 It's in a fronting and headlining capacity, rather than serving as the indispensible musical element to either Damon Albarn or Charlotte Gainsbourg's backing line-up or lending a rhythmic hand to his mate, Cheick Tidiane Seck (as witnessed last December at the Jazz CafÃ©), that the mighty Tony Allen will visit us next autumn. The drumming maestro, who needs no further introduction is currently putting the final touches to his autobiography with the provisional (but appropriate) title, 'Tony Allen: Master Drummer of Afrobeat', and will play a handful of gigs in early October, at the Edinburgh Picture House on the 2nd, The Wardrobe in Leeds on the 3rd and Metropolis in Bristol on the 7th [with hopefully more to be announced - watch this space - Ed].

Prior to that, Allen will perform at this year's WOMAD festival in Charlton Park, in Malmesbury on Friday 23rd July.

His fourteenth studio album, "Secret Agent"came out in June last year and is available from every decent record store.

Tickets for Tony Allen's October dates are on sale now and rane from Â£12.00 to