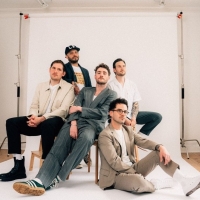 Welsh punk-poppers Kids In Glass Houses have announced a new headline tour in support of their latest album, and to follow up their upcoming T In The Park appearance and their recent support of Stereophonics. With the release of "Dirt" also under their studded-belts, and with it another top 30 album, Kids In Glass Houses are all set for phase 2 of their "Dirt" UK tour (the first leg was played in May).

Although their recent single "Undercover Lover" (featuring Saturday's singer Frankie Sandford) didn't set the world on fire, the new album "Dirt" certainly did, despite being available to stream in advance (from My Space), proof that online-freebies might not be such a bad thing after all. Legal ones of course. Anyway, their recent appearance at Radio 1's Big Weekend hasn't done them any harm, if anything creating a bit more hoo-haa for these tickets.