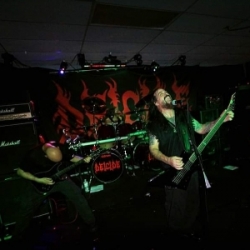 With just a few days to go before Floridian death metallers were due to hit the UK for a short June tour, we can tell you it has been cancelled.

The band (whose name means killing gods, fact fans) were due to play the Millennium Music Hall in Cardiff this Saturday, with further dates in Sheffield, Belfast and Reading. Presumably it has been postponed to coincide with the release of their yet-to-be-released 2010 album, titled 'To Hell with God' - hard to say, as no official statement has yet been released.

Ticket-holders are advised to obtain a refund from their point of purchase.