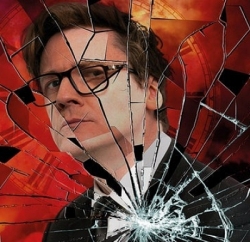 It seems you cannot escape Ed Byrne, with his chirpy image of him clutching a pint and thumbing the camera, and fair play - he's a funny sod and has actually been around a bit longer than you might think. The Irishman first appeared on our screens, albeit very briefly, as a mocking teenager on Father Ted's chat-line but has more recently been seen on oodles of TV panel games such as "Mock the Week".

But Byrne's obvious forte is performing live, including a previous stint at the Hammersmith Apollo plus upcoming appearances booked for Glastonbury (26th June), the Ealing Comedy Festival (16th July), the Dublin Carlsberg Comedy Carnival (24th and 25th July) and the Rock With Laughter event in Birmingham in December. Now he has lost control of his mind and opted to head to Scotland in October - does he know how many umbrellas he'll get through at that time of year? Mind you, he has made this a very special trip by picking superb Highland and Island locations to play at.

Tickets go on sale on Monday 5th July at 10AM, costing around £15 and spaces are obviously quite limited at a few of the venues, due to space.