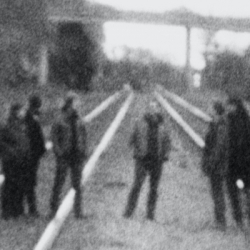 As recently announced, the mysterious instrumental dream-rock outfit Godspeed You! Black Emperor will be curating the ATP Festival in Minehead from 3rd-5th December as part of the Nightmare Before Christmas season of concerts. In addition to the appearances on the Somerset coastline, GY!BE has announced a cluster of headline dates to take place soon after ATP.

Tickets went on sale about half an hour ago so do check the roster below and get clicking - the band doesn't play here that often! The tour kicks off on 7th December in Manchester before heading to Glasgow on the 8th, Bristol on the 12th and finally London's grand Troxy venue on the 13th, the latter of which is likely to sell out fast. Who knows, maybe those nice fellas will add more dates if they shift quickly enough (and the Troxy isn't a huge venue). Prices cost £22.50 plus fees with the option of seats at the Troxy for £25.

The reunion of the band has been made that bit sweeter by the return of guitarist Mike Moya, who has been fronting another Canadian post-rock outfit, HRSTA. There is no sign of any new recorded material although you never can tell with this unique and treasured band.