Them Crooked Vultures for special benefit gig in Brixton, July 2010 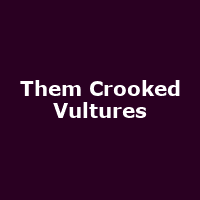 Unless you have been living a very sheltered life, devoid of any rock-goodness for the past few months, you will know that Them Crooked Vultures are: Dave Grohl, Josh Homme and John Paul Jones. And if you're still thinking 'que?' [he's from Barcelona - Ed], then you really don't know you're Rock 'n Roll, do you?

Them Crooked Vultures exploded onto the music scene late last year, causing more than a ripple with the release of their debut, eponymously-titled album hitting the top 20 pretty-much all over the world, and garnering a five star and four-and-a-half star review from our very own Elly Roberts and Paul Pledger.

Their short December '09 run of UK dates sold-out in minutes, causing them to add another London date and two March Royal Albert Hall dates - and guess what happened to them? Yep, sold-out as well. The band made their debut UK festival appearance at Download last weekend, and are back in Blighty again next month at the Brixton Academy on 5th July.

The night is aimed to raise funds for Brian O'Connor, the bassist with Eagles of Death Metal and TCV friend, who has recently been diagnosed with cancer, but has no insurance.

Now, I don't think I need to tell you that the Brixton Academy is not the largest of venues - I mean it's ample for some bands, but not this lot, so expect ticket-server mayhem, as people scramble for tickets (Â£32.50 + fees) this Friday at 9AM... see you on Friday morning!