The Dwarves are far from being as pure as Snow White - US sleazecore grungers return to the UK, August 2010 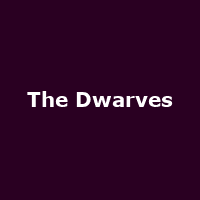 Chicago's potty-mouthed garage-punk outfit, The Dwarves are probably not the first band you would consider as guest-presenters on, say, Songs of Praise. Nor would you bet on them behaving themselves at a village fete. As for trusting them behind the wheels of public transport, are you kidding?

This mid-1980s bunch of reprobates has got previous - for a start their album sleeves are a tad risky, usually involving lots of blood and tits. Especially tits.

A few song-titles are also a teeny-bit cheeky, ranging from "Let's F***", "F*** You Up And Get High" and "Who's F***ing Who", through to the carnal delights of "Back Seat of My Car", "Pimp" and "Insect Whore". Add in a melange of break-neck punk, hardcore, garage, self-mutilation, drugs and sex on stage and you wonder why your mum won't let you go to their gigs. It's OK, just tell her that their first album was called "Blood Guts and Pussy", she's bound to say 'yes'.

"The Dwarves Are Born Again" is the title of their new album and, lo and behold, the legendary quintet are playing a few UK dates to support it and whilst their truly outrageous days are behind them (sort-of), Blag Dahlia and co (including the allegedly, but not really, murdered guitarist HeWhoCannotBeNamed) bring a certain level of noisy mayhem to Sheffield on the 7th August, followed by Manchester (9th), Glasgow (10th) and Newcastle (11th) - keepin' it Northern! Tickets cost Â£8 plus fees.