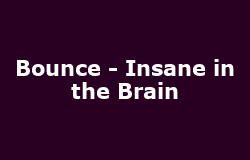 Bounce - Insane in the Brain

For the next three weeks, the Peacock Theatre will host the stage production of the timeless classic, 'One Flew Over The Cuckoo's Nest', based on the 1962 novel of the same name by Ken Kesey and first adapted on stage by Dale Wassermann in 1963 before being immortalised on screen in Milos Forman's 1975 film, starring Jack Nicholson.

Only this time, the story of "the rebellious Randle Patrick McMurphy, a happy-go-lucky transferee from a prison work farm to a mental hospital, who after having been found guilty on a battery charge, fakes insanity to serve out his sentence in an all-male asylum", is told in the language of dance, and hip hop dance for that matter... The street dance spectacle, Bounce, will re-enact this tale of psychosis, in the appropriately entitled production 'Insane in the Brain', and perform popping, locking, boogaloo and God knows what other types of routines to a soundtrack comprising Missy Elliot, Dizzee Rascal, Gotan Project, and Cypress Hill, among others... Are you crying blasphemy or sacrilege as you are reading this? Then drop it as the likes of The Guardian, The Times, The Sunday Telegraph and The Daily Express have all praised the production.

Go and see it for yourself as it runs until 27th June 2010, with performances starting at 8pm (Tuesday to Saturday), Saturday matinees at 2.30pm and shows at 4pm on Sundays.

This is the third time the Peacock Theatre has staged the show - the first was in 2008, the second last year and the production also played at Manchester's Lowry last year. Tickets are on sale now, ranging from Â£10.00 to Â£36.00, tonight's opening performance are only available via www.sadlerswells.com - check below for availability for all other dates.