Korn Remember Who We Are - new album, video and October 2010 UK dates announced 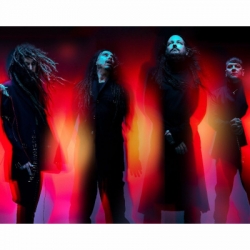 OK, maybe the album and video bit isn't that new, but the dates certainly are primed and gleaming! Yes, Korn are back with their hybrid of technical metal and right-on angry bluster, wielding a new album and some UK giggage. The album is released around mid-July and single "Oildale (Leave Me Alone)" has already been released in the States to critical acclaim. Being a bit of a decent video, we've embedded it here for your delectation. As we live in sensitive times, we should warn you that there is a bit of swearing in it - we should, but we won't.

Meanwhile, the chaps have released details of their UK tour (well, short hop I guess), starting in Southampton on 8th October, Wolverhampton on the 9th and Manchester on the 10th, with tickets for Wolverhampton going on sale Friday 18th June at 9AM, costing £28.50 plus fees - the other dates on sale soon. This is their first batch of date since 2008 and does beg one question - will they play London or Scotland? Patience, patience: we will let you know 'when' (rather than 'if'). Interestingly, Korn have publically declared an amnesty on all BP products being used in their tour-buses (and even aircraft). I wonder if they continue with those principles once they see how exciting our motorway service-stations are over here. Just kidding lads, fair-play I reckon.

The new album will be called "Korn III: Remember Who You Are" and gets a release on Roadrunner in July, possibly across three formats. Apart from the standard CD edition, a double-disc with an extra bonus DVD plus an extravagant box-set edition with a wallet, T-shirt, bandana, necklace and wrist-band (as well as the double disc version) will all see the light of day on the 14th July. Yowsah! The album itself, according to the band' will be simpler with no Pro-Tools just 'the vibe'.