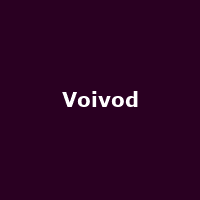 Back in 1984, something very loud was stirring and it wasn't a beef and tomato Pot Noodle - it was (drum-roll) 'Thrash' and, alongside Slayer, Anthrax and Onslaught, Voivod were carving out their own niche within the genre. Coming from Canada didn't seem to be a hurdle since they were possibly louder than most other similar bands. Their first few albums, although not million-sellers, were cult-favourites with 1987's "Killing Technology" generally considered to be their evolutionary starting-point. The band actually improved on that album with "Nothingface" in 1989, adding in some rather more progressive riffs and passages and widening their audience.

Now, some 25 years on, Voivod are back with a vengeance and a handful of UK dates, possibly their last. The band have claimed that 2009's "Infini" album will be their final studio album, due in part to the death of their guitarist "Piggy" (aka Denis D'Amour) in 2005 - this is material recorded just prior to his passing away.

The remaining members will play four dates in August, starting with Southampton on 8th August, Nottingham (9th), Manchester (10th) and the Garage in London on the 11th. Tickets will fly out for this, priced at Â£15. Playing at a slightly slower pace as support will be the wonderfully-named Nashville Pussy, obviously in homage to the studio cat. Or maybe not.