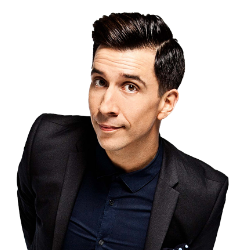 Well it seems like only yesterday that I was perusing the biggest bloody festival guide ever, trying to pick out the very best of what the 2009 Edinburgh Festival had to offer. Frankly, it was like choosing a grain of sand on Brighton Beach.

This year's already looks like a hottie if the previews are anything to go by, comedy once again taking centre-stage with some cracking warm-ups scheduled for the next few weeks (a few were covered in a previous article, but now the list has swollen considerably). Here we have picked some of the more interesting gigs in and around June and July in the big build-up to Edinburgh's finest.

Already an Edinburgh veteran, Kane has previously been nominated for an If.comedy award (in 2008) and, to prove the point, the energetic and promising young comedian takes to the stage for a handful of previews, beginning with London dates in Bloomsbury (tomorrow night) and Hammersmith's The Grove on Sunday (13th), before heading off to Leicester (21st), Leamington (24th and 15th July), Ashby-De-La-Zouch (29th), Stafford (4th July), Clapham (13th) and finally Burton-On-Trent on the 30th July). Most tickets are still available, some even a tenner or less!

Another Edinburgh veteran (ahem) is king of the solo-show, Carey Marx who has performed around half-a-dozen of them at previous Edinburghs. He plays downstairs at The Drayton this Friday, before a pile of preview dates in London, Kingston, Swansea and Manchester until heading back to the capital for a night at the Rich Mix Foundation with Stephen K Amos. Many of the dates are around £10 to get in - bargain.

One half of funny duo Lee and Herring, Stewart is sticking to London for his previews, the pick of which include a collaboration with the chucklesome Bridget Christie at the Hen and Chickens in Islington on 20th June and 4th July, another gig with Christie on the 6th at London Bridge Belushi's, a pair of headliners in Clapham (9th July) and Borough (15th July) and an appearance at the Just The Tonic Comedy Club, Leicester Square on 17th July with Paul Foot. Foot himself is also treading the boards in London, especially on the 27th June at the Clapham Railway for another £10 special.

Anyone who doubts female comedians needs to take a look at themselves or, better still, go and see this really funny Iranian-born performer. She appeared on the TV series "Live At The Apollo", cracking satirical and cultural gags with aplomb and you can see her perform at The Chapel Bar with Stewart Lee on 15th June, on her own on the 22nd at The Comedy Pub and a few headliners in Leicestershire during July. But for true girl-power, see her double-bill appearance with another hilarious lady, Isy Suttie from Peep Show and Robin Ince's Book Club. They play together (oh stop it lads) on 1st July at Belsize Park's Washington - £5 people! Isy herself will also be 'warming-up' at the Amersham Arms on 28th June (tickets are £6, Pete Firman is support).

If sketch-shows are your thing or you just prefer the company of more than one comedian, then comedy-team Idiots Of Ants might whet your whistle, so to speak. They pretty much live at The Hen and Chickens in North London and are planning a batch of 'preview' shows at that venue during July, tickets under £10. They have sold-out their Edinburgh gigs before, so why not get in quick to give them a good send-off.

This man has already got a considerable tour mapped out and within its dates are a few preview shows (though any one of them is worth a watch, I reckon), the first of which is on the 16th July at the Rich Mix (with Andi Osho), with another at the Clapham Railway on 28th July (with Paul Sinha) - both are just £10.

For a full list of Edinburgh Comedy Previews, check out our chronological run-down below. We will update this update with further updates in the coming weeks (well, it is in an update after all). Happy clicking.