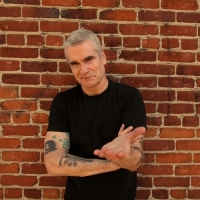 Black Flag and Rollins Band legend, Henry Rollins, has announced his intentions to join in with the largest arts festival in the country with a selection of Edinburgh Fringe dates in August. Although we will be publishing the first of a few updates about this year's Edinburgh Festival, Henry is just too good an opportunity to miss!

He will play a string of spoken-word gigs at Edinburgh's Udderbelly venue, based at the Cow Barn in the city. You can't miss it - it's a huge purple cow, laying on its back with its udders on display for all to see. Think I'm kidding? Londoner's have their own 'Udderbelly' already in place on the South Bank near the London Eye. You can imagine our Henry will have something to say about his chosen venue, but I'm sure he won't want to milk it [ouch! - I hope no one has a beef with that pun - Ed].

Anyway, back to the dates and they are from 23rd - 29th August with tickets costing just Â£10 for the first two dates, then Â£15 for the rest plus a fee. Best get booking soon because Rollins does have the unerring ability to sell-out his stand-up bouts of wisdom, wit, satire and intelligence. Sorry girls - I doubt he will be wearing a kilt on this occasion.