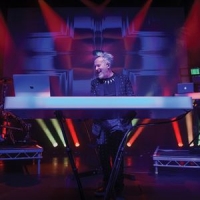 According to Wackypedia, Howard Jones' hit, "Like to Get to Know You Well" spent over a decade in the Virgin Islands' Top 40 charts. 500 weeks. Blimey. That's longer than it takes to wait in the Post Office. Still, it's a good little pop-song and one of a larger-than-you-think repertoire of High Wycombe's talented song-writer who rose to fame via John Peel, of all people (as well as Janice Long etc). Y'see, everyone remembers the late-legend as a spring-board for maniacal thrash-outfits or Bulgarian folk-punk bands but he also had a penchant for light and airy synth-pop in the 80s, OMD (pre-Crush), Depeche Mode (pre-stadiums) and Human League (pre-Dare) being just a few - another was Howard Jones and his debut "New Song".

Jones subsequently went on to great things - two huge albums and a couple of handfuls of catchy, synth-led pop songs ensured that young Howard entered the coveted annals of pop-history with his held high. Now you can witness him re-create BOTH "Human's Lib" and "Dream Into Action" in their entirety at the IndigO2 on Saturday 6th November at a cost of £29 plus fees. This is a one-off concert, 'never-to-be-repeated' etc and will feature "What Is Love?", "Pearl In The Shell", "New Song", "Things Can Only Get Better", "Look Mama", "No-One Is To Blame" and "Like To Get To Know You Well" plus many more.

Aside from playing Bestival on 9th September, the ex-spiky keyboardist is also out on the road for an extensive acoustic tour starting in Lincoln on the 15th of that month and covering a dozen or so venues until Taunton on the 2nd Oct. Tickets for these are around £15 (and no doubt Howard will perform a few hits as well as from the 2009 album "Unsung Heroes").