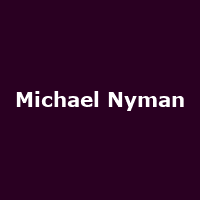 One of Britain's most-celebrated and acclaimed composers returns to the Barbican Centre in October, unveiling a brand new work as well a recent addition to his vast back catalogue.

The date in question is Sunday 17th October and tickets are on sale now at Â£25, no doubt selling quickly as I type!

The first part of the programme for this concert will include a rendition of the 2009 song-cycle, "The Glare", co-performed with ex-Thieves crooner and Bernard Butler-partner, David McAlmont. This is an interesting set of songs - McAlmont used current news stories to inspire the lyrics, with Nyman plundering his rich catalogue for re-readings of music from throughout his career. The critics fell over themselves to appraise the album with many stars and plaudits.

The second part sees Nyman unveil a brand new instrumental piece, based on Vertov's "Man With A Movie Camera" originally released in 1929 as a silent documentary about Soviet city-life. The film was a landmark release in that it used various cinema-techniques that we take for granted, such as slow motion, cut-up and freeze-frames. Nyman has now created a 'shot-by-shot' soundtrack for the film, something that makes this presentation unique to the Barbican. The piece will be performed in its entirety by The Michael Nyman Band.

While stocks last, we are able to offer you tickets for seating in the stalls just Â£15 + fees - click the "Book this Offer" button to check for availability.