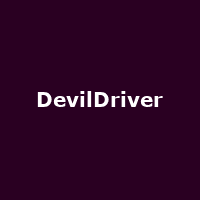 Formed from the ashes (sorry) of Coal Chamber in 2002 (well, Dez Fafara at least), DevilDriver have impressed a lot of people with their intense death and melodic metal since the release of their self-titled debut in 2003. I say 'since' because the debut was generally frowned upon as too mainstream - cue the follow-up a few years later, "The Fury of our Maker's Hand" - what an unholy racket (in a good way). The trend has continued with "The Last Kind Words" and 2009's "Pray For Villians" and is likely to hit new heights with their fifth full-length set, due out in November. And with a new album, there comes a new tour.

On support-duty is another Roadrunner outfit, 36 Crazyfists (although they have just left that label in the UK), who also have a new album looming. Due for release in July, the album is called "Collisions and Castaways" and is set to appear on the 27th.