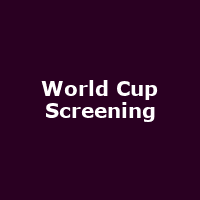 You'll just have to face it - the World Cup will be everywhere (literally) from next weekend, leaving half the population alienated from the TV, the kids and all rational thought. Mind you, I feel sorry for the fans - they have to put up with the usual motley crew of cochlea-juddering (un)official (and crap) football songs being scattered about like picnic-plates. Porn-mogul Ben Dover has even made one - "England Expects". It's the aural equivalent of STDs. The best of the bunch so far seems to be Goldblade's raucous rabble-rouser, "England's Dreaming", but none of them come close to "World in Motion" or "Three Lions". Nope, I'll be watching it, not humming it.

Indoor screenings don't come much bigger than the free Hammersmith Apollo effort (12th, 18th and 23rd - depending on progress). You still have to obtain a ticket from the links below but this entitles you to seat selection, important for the discerning fan. Apart from a small processing fee (Â£3.25), you get gratis entry - in the warm and dry. Nice. Drinks promotions for after the game and pre-match DJs complete the line-up. Win.

Other London events include the first game being shown at Monto Water Rats for Â£6 plus the price of beer and music, all three group games at The Casino at the Empire at Leicester Square (Â£35 includes 2 beers and a buffet) plus cheerleaders (easy now), the Millbank Cinema and Media Centre (Â£65 includes UNLIMITED beer, wine or soft drinks, comfy seating, massive HD screen, snacks, bowls of food, waiters (yes waiters!), cloakroom and the winning goal, we hope.

Pick of the bunch though has to be "Peter Shilton's Handball Maradona", staged at the Hoxton Bar and Grill on the 18th and the 23rd . The Sunshine Underground will appear on the 18th to get us in the mood and, who else but Lightning Seeds (acoustic set) on the 23rd to hopefully sing us into the next round. For Â£20 / Â£15 respectively, you'll get the full match to watch and a live gig - not bad.

There are other screenings around the rest of the country, including Rock City in Nottingham (free). Check the list below for more suggestions (not including the one about taking Walcott and leaving Heskey in the stables) [Will Heskey score? Neighhh! - (mister) Ed].

London's beautiful Alexandra Palace is to stage the three qualifying England games, all shown on a big screen. Entry price is Â£6.50, which includes your first drink. Manchester's Castlefield Arena will also have a large screen showing proceedings for the three games - and is free entry!

Football with a Jazz Soundtrack?

For those of a jazzy persuasion, the Vortex in London offer you an interesting variation on the usual World Cup experience: a live jazz band will improvise a soundtrack to your viewing, with the music reflecting the activity/ score-line of the game. For the group stage, only the last England game will be covered (Slovenia on 23rd June), with other dates including: Italy v Paraguay (14th), South Africa v Uruguay (16th) and the knockout stages - hopefully featuring England (on 26th and 27th).