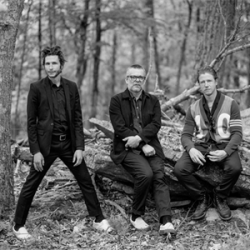 One of the forerunners of the 'post-punk' revivalist-scene returns later this year with new material and, more importantly, a pile of new UK dates. Interpol are back and raring to go, despite a line-up change, a delay in making the new album and a gutting cancellation of their support-slot on U2's doomed 2010 360 Tour (due to Bono's back needing surgery). I don't know - life isn't easy, nor a bowl of cherries in Interpol: Carlos Dengler opted to hang up his keyboard and bass earlier this year, straight after the new album's completion, which means there will be a guest bassist throughout the upcoming tour.

Which leads me onto Interpol's UK and Ireland dates - they begin in Nottingham on 24th November and continue to Newcastle (25th), Birmingham (26th), Edinburgh (27th), then over to Dublin for three dates at the Academy back to the UK and Manchester (3rd Dec), Liverpool (4th) and finally a double-whammy at the Brixton Academy on the 6th and 7th Dec. That's what we like - no dicking around with a single date and a sheepish addition due to a sell out, straight in with two of them. Bam!

Tickets for the UK dates start at £22.50 and go on sale at 9am on Friday, with the Dublin dates on sale now (44.20). Don't underestimate how quickly these will sell!

Naturally, besides wanting to hear the familiar intensities of "NYC", "C'mere" and "Evil", you'll be gagging for some new material. You'd best speed over to their website at www.interpolnyc.com for an exclusive peek at a new downloadable song called "Lights" - oooh, it is rather good as well. A slowly-building mood-anthem, just how we like 'em and hopefully a sign of things to come in the autumn.