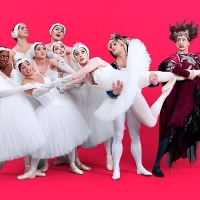 Earlier this week, we told you about the new listings for Islington's Sadler's Wells theatre - now we bring you the newly-announced autumn / winter collection due for presentation at its sister-venue, the Peacock Theatre based in Holborn, and what a little corker it is too.

British Youth Opera The BYO and the Southbank Sinfonia have teamed up to bring you two operas during September, "La Boheme" and "Euridice". Puccini's romantic 'must-see' "La Boheme" will be performed on three dates only, 4th , 7th and 10th, while the Stephen Oliver modernist take on Greek mythology, "Euridice" (based on the life of Eurydice, wife of Orpheus), plays on the 8th and the 11th. Tickets cost from just Â£10 to around Â£36.

Les Ballets Trockadero de Monte Carlo Here is ballet with a difference and no mistake. 'The Trocks' are, um, not quite as they seem despite wearing tutus and pirouetting with the best of them. Mixing comedic moves and nimble-footed (!) humour, much-loved ballet and contemporary classics are given a new twist by the New-York-based company with suspiciously hairy legs. On the 14th and 19th September, they perform modern pieces "ChopEniana" and "Patterns In Space" as well as the classic 'pas-de-six' from "Raymonda's Wedding" while on 21st and 25th, the troupe tramp their way through "Swan Lake" and "Harlequinade". Ticket prices aren't a 'drag' (cough) either - Â£15 upwards.

Traces [Les 7 Doigts de la Main] This excellent circus-show from Seven Fingers had a sell-out run in 2009, not only at the Peacock but also in Paris and New York. One of my friends went to this and said it was (ahem) "the best thing I have ever paid for". Praise indeed from a stage-hand's partner. "Traces" is a show with breathtaking gymnastics, skateboarding, basketball(!), hoop-tumblers - in fact if it hasn't got bungee-jumping or lion-shepherding I'll be gutted. I jest - this looks a lot of fun and tickets only start at Â£10, rising to Â£38. The show plays from 28th September until 30th October.

BalÃ© de Rua If Latin-fired street-dancing gets you hot under the collar, "BalÃ© de Rua" looks a good bet to repeat the sensation. This Brazilian production has been choreographed by the acclaimed self-taught dancer, Marco Antonio Garcia and features a lively mix of African rhythm, Brazlian samba, a spot of capoeira and a smidgeon of hip-hop. The whole presentation translates into 'street-ballet' and you can expect plenty of driving South-American percussion-pieces and body-swerves, that might make you feel just a tad guilty about that extra handful of Pringles you've just devoured. "Bale De Rua" plays from 2nd to 20th November with tickets priced at a very reasonable Â£15 upwards.

The Snowman I hate to use the 'C'-word on this site (unless I'm reviewing N-Dubz, of course), but Christmas this year at the Peacock Theatre will play host to a music and dance version of Raymond Brigg's splendid fairy-tale, "The Snowman". You know the plot by now - a snowman comes to life in a little boy's garden and the adventure begins - but not before Jack Frost starts poking his unwanted nose into everything. Boooo! Plays from the 1st December until 9th Jan 2011 - I would seriously think about booking now.