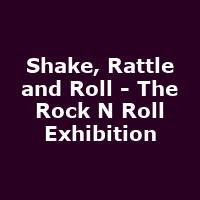 Hey, take a walk on the posh side - of London that is - as there is plenty to see over the coming weeks, especially at The Brompton Quarter Brasserie in Knightsbridge, where 'Shake, Rattle and Roll - The Rock N Roll Exhibition' has just opened (on 26th May). So drop by to visually reminisce of bygone and dead-or-alive rock stars such as Jimi Hendrix, George Harrison, Rod Stewart, Bruce Springsteen or Pete Townsend, captured by three prominent snappers of the 1960s in David Montgomery, Terry O'Neill and Baron Wolfman. It's all nostalgia indeed, with the focus put on the golden three: The Beatles, The Stones and The Who, and Amy Winehouse will surely seem out all place in this retrospective (it must have been the beehive...), but a great pic is timeless, isn't it?

All prints are for sale, so if you feel like treating yourself or someone, just go for it: the show will be on until they've all gone, i.e. the summer we're told, so Shake, Rattle and Roll-up to Brompton Road!

Entry to the brasserie is free, except maybe for a nice meal or pint to keep up appearances.