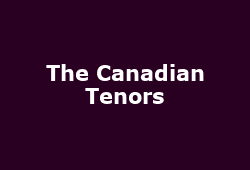 Celebrating Canada might conjure up lots of hackneyed stereotypes to some of us - maple leaves, logging, beavers, the old moose, ice hockey, Bryan Adams, well you can see what I mean. But Canada has given the music industry more than just Celine Dion's irksome whimsy - Neil Young, k.d.Lang, Rush, Diana Krall and Joni Mitchell being just a few. Goth, metal, indie, industrial and electronic have more recently proved to be a lucrative well of talent as well, and it is a few of these genres that are represented at London's very first music festival devoted entirely to Canada.

Called "CANADA" (obviously), this three-day shindig will take place across several London venues, showcasing well over a dozen bands and a few DJs from 29th June - 1st July. Tickets are available for each gig, rather than a catch-all single ticket and are on sale now. It is also the first time such a festival has been held in London, so whether you are a Canadian national or a curious Brit, everyone's welcome. Note that all tickets purchased are entered into a free draw to win a trip to the beautiful country itself.

The Canadian Tenors So, what's on offer? First up on the Tuesday is a rare concert by the massive Canadian Tenors. They have won countless awards in their home country and sing a repertoire of operatic pop and classical anthems. They open the celebrations at Islington's Union Chapel, tickets priced at Â£22.50. Think Il Divo and you are someway there.

Hawksley Workman The 229 venue will play host to a pair of gigs on the Wednesday evening - Prolific singer-songwriter Hawksley Workman heads up the 'big room' entertainment with support while in the 'small room', RnB sensation Jully Black will belt out her hits (in Canada, she regularly bothers the Top 40). Â£10 for Hawksley or Â£7 for Jully.

Plants and Animals Other venues on Wed 30th June include The Lexington (Plants and Animals, Dan Mangan), The Wilmington (Ruth Minnikin) and Camden's Black Heart (Ghostcat) - all tickets are under a tenner, while on the final day you can catch techno-legend Richie Hawtin and break-house duo Layo & Bushwacka! play out at the Village Underground in Shoreditch for Â£15. Looks like a pretty good weekend's entertainment, so raise the maple and join in the fun.