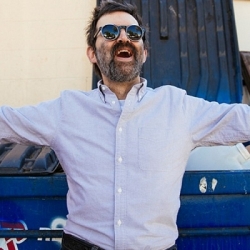 Mark Everett and his influential and revered Eels will return to the UK in August to support the release of the final instalment of their recent 'Concept Album Trilogy'. The three intimate album series began with "Hombre Lobo" last year, followed by the four-track atmospherics of "End Times" earlier this year. The third part is provisionally called "Tomorrow Morning" and should see a release later in the summer - which sets up their first world tour since 2007 rather nicely.

Britain will inherit four dates, the first of which is in Glasgow on 24th August followed by Birmingham (26th), Brixton (1st Sept) and finally Manchester on the 4th. All tickets are £20, except London which is £25. Two dates go on sale tomorrow - Glasgow and Brixton - and two are unleashed on Friday, those being Birmingham and Manchester.

Although Eels haven't hit the commercial heights they achieved with "Novocaine for the Soul", "Susan's House" and "Mr E's Beautiful Blues", their music has consistently become even more cherished with songs such as "Fresh Blood" and "A Line In The Dirt". Should be an intimate evening.