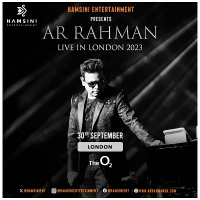 You will no doubt be familiar with the successful film-hit of "Slumdog Millionaire", but you might not be familiar with the name behind the music - A. R. Rahman, unless you have witnessed the many Tamil and Hindi movies he has scored back home. The man is a master - he has scored huge Indian productions such as "Bombay", "Lagaan", "Dil Se", "Roja" and "Rang De Basanti", earning him several awards for his work as musical-director and composer. He has also worked on "Lord Of War" and "The Accidental Husband" plus he has written a wealth of incidental music, ad-jingles, theme-tunes, pop-songs and dabbled in a spot of orchestration with tabla-king Talvin Singh for his "Anokha" series, as well as MIA and Pussycat Dolls. He is the Morricone of the Indian Continent, quite frankly.

Rahman has announced a world tour entitled (deep breath) "The A.R.Rahman Jai Ho Concert: The Journey Home World Tour" and us lucky Brits occupy three huge performance-slots, one in Birmingham at the NEC/LG Arena on 23rd July and two in London starting with the O2 Arena on the 24th and Wembley Arena on the 25th. Tickets are now on sale priced from Â£39.75 to Â£110 for all three dates (there may be a slight differentiation between the two venues) and you are advised to book early.

The concerts promise a proper theatrical show featuring Indian dance, acrobatics and plenty of Rahman's exquisite scores and contemporary songs throughout the evening. If you'll pardon the pun, variety will be the spice of life for these evenings. This is a rare chance to see a real legend work his pop and film magic in one evening.