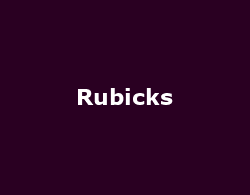 London-based cult alternative outfit Rubicks released their next single entitled 'Giddy Up' on the 10th May 2010, which was recently heard on legendary Italian fashion house Valentino's latest campaign featuring Ernest Hemingway's grand-daughter Dree and famed male model Cole Mohr. Already establishing themselves as an act that stands out from the pack, this use of the track in the highly regarded fashion brand's campaign just reinforces the 'cool factor' their music possesses.

The song which is already receiving support from NME Radio, XFM, 6Music and featured in The Best of MySpace podcast with Gill Mills is taken from their 2nd LP which is to come out on Sharp Attack Records and is set for release this summer. Produced by Robert Harder (Brian Eno, Acoustic Ladyland and Whitey), a friend and previous collaborator on their critically acclaimed debut LP 'In Miniature', the band are now looking to incorporate a slightly electronic edge to their already new wave-influenced alternative sound.

With this move to a more electronic vibe, the band state that their new LP offers 'hope in a bleak twisted landscape akin to The Knife, Siouxsie and the Banshees and T-Rex.'

Following their much-admired 2009 'Idiot Time' EP and 2006 album 'In Miniature' which marked them out as 9/10 in NME ('too good for the album pages'), they have recently toured throughout America, Canada and Europe playing festivals including SXSW, Canadian Music Week and one in a Lithuanian forest in addition to supporting Gary Numan, White Rose Movement and John Foxx on their tours.

Rubicks is currently residing at the studio/art gallery 'the Maurice Einhardt Neu Gallery' in East London district Shoreditch and preparing for these upcoming releases, UK touring & a slot The Secret Garden Party.