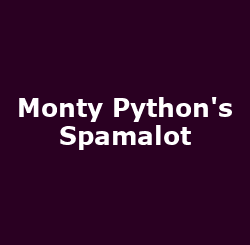 If parody be the food of life, then get your chops around some Spam a lot. No it isn't the new advertising jingle for the canned chopped-porky-mulch product that fed Britain during the last war (and is making a comeback it seems), it's a call to anyone who hasn't seen Monty Python's ridiculously funny and surreal musical take on Arthurian legend, "Spamalot", to get clicking and catch it on tour later this year.

After a successful Tony-winning and West-End-wowing few years, the extremely silly and inventive merger of myth, legend and spontaneous musical euphoria hits the road for an extensive, and now even longer gallop across the nation, starting in Wimbledon on 29th May - 5th June, moving on to additional new locations in Glasgow, Bromley, Cardiff, Woking and Milton Keynes. Check the list below for the complete tour programme.

"Spamalot" is loosely based on the film "Monty Python and the Holy Grail" and even more loosely-based on King Arthur's quest for the aforementioned sacred object. Full of 'classic' show-tunes such as "Always Look on the Bright Side of Life", "I am Not Dead Yet" (sung by the character Not Dead Fred), "The Song That Goes Like This" and "The Fisch Slapping Dance", this is a night where you don't so much as leave your brain at home but instead, drag it kicking and screaming out of its comfort zone into the land of the very silly indeed.

If you don't enjoy the production, don't demand a refund - 'demand a shrubbery'. It worked for the Knights of Ni!