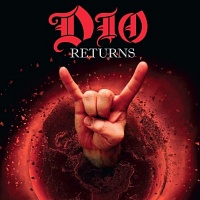 Ronnie James Dio has tonight died as a result of a battle with stomach cancer. The former Rainbow singer famously replaced Ozzy Osbourne who was fired from Black Sabbath in 1979.

Leaving Black Sabbath in 1982, Ronnie went on to form the successful band Dio, with whom he was due to tour Europe this year, but his diagnosis with stomach cancer in November - announced by his wife and manager - caused the cancellation of the tour. Later posts, revealed how Ronnie appeared to be beating the disease, with a March statement announcing his seventh Chemotherapy session and results as "good".

However, Ronnie's other band - Heaven & Hell (who were due to support Iron Maiden in Dublin this July), featuring former members of Black Sabbath - cancelled their Summer dates a few weeks back as a result of Ronnie's ill health, and this morning, his wife Wendy posted this:

Today my heart is broken, Ronnie passed away at 7:45am 16th May. Many, many friends and family were able to say their private good-byes before he peacefully passed away. Ronnie knew how much he was loved by all. We so appreciate the love and support that you have all given us. Please give us a few days of privacy to deal with this terrible loss. Please know he loved you all and his music will live on forever.
- Wendy Dio

A book of condolences has been started on Ronnie's official Facebook page: www.facebook.com/OfficialRonnieJamesDio