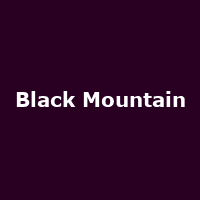 It's probably not a good time to be called Black Mountain, seeing as one of the bloody things has got an over-active mouth just north of Britain. Still, you could be called Ash. Canada's psychedelic rockers, Black Mountain have announced their return to these shores with another batch of gigs to satiate demand - after all, their two July dates at the Lexington sold out pretty damned quick.

They will play the Oxford Academy on the 4th September, Leeds Woodhouse (12th), Glasgow Oran Mor (14th), Manchester's Academy (15th), Nottingham's Rescue Rooms (16th) and finally back to London on 7th Oct at the Shepherd's Bush Empire. Tickets range from Â£11 to Â£14 (London) and go on sale on Friday 14th May at 10AM.

The band has been working on a third album, due out on JagJaguwar later this year - meanwhile Black Mountain will play a few festival stints in the summer at Latitude, T In The Park and End of the Road.