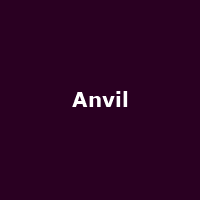 Canada's famous metal-masters, Anvil, were a major influence on many classic thrash-metal acts such as Slayer and Anthrax - so why didn't they pack out the stadiums like their successors? Well, some get the breaks and some don't. Not that Anvil weren't a good band - indeed they were and still are. After years in the proverbial wilderness, Steve 'Lips' Kudlow and his boys were made the subject of the film "Anvil! The Story of Anvil!" in 2008 and, suddenly, everyone wanted a piece of their (ahem) 'Strength of Steel'.

The boys are back in town, so to speak, when they embark on a short UK hop, starting in Manchester on the 14th June and continuing to Glasgow on the 16th, Sheffield on 7th July and Bristol on the 8th. Tickets cost around £11.50 plus fees and go on sale here at 9am tomorrow morning (Thursday 13th May).

Anvil epitomised good old-fashioned rock n roll values, determined to stick to their guns through thick and thin, recording a swath of riff-packed albums in the 80s - now the band are busy putting together a new album called "Juggernaut of Justice", due out later this year.