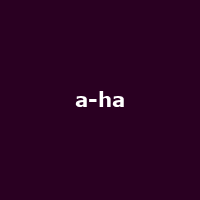 Before bowing-out with their last ever UK tour this November, a-ha are to play a special date at the Royal Albert Hall, where they will play 'Hunting High and Low' in its entirety.

Hunting High and Low was the Norwegian electro-popsters debut album, released in 1985, which topped the charts in Norway, Sweden and Austria, coming a close second in the UK, but the singles it spawned fared a little better. 'Take on Me' and the rather nice 'The Sun Always Shines on TV' were both monstrous hits all over Europe, with both of them hitting the top spot in the UK.

Marking the 25th anniversary of their debut album, Rhino Records are going to release a deluxe version, spanning two disks including rare and unreleased songs, including the original 7" version of 'Take on Me', a demo version and demos of: 'The Sun Always Shines On TV', 'Train Of Thought' and 'Hunting High and Low' as well as the fans' favourite B-side: 'Driftwood'. The deluxe edition will be released on 12th July and is available for pre-order now (check the link to the right).

The Royal Albert Hall dates means their UK tour now starts and ends in London, with their November 'Ending On A High Note' final farewell tour kicking-off on 15th November at the Brighton Centre, seeing the boys hit venues the length-and-breadth of the UK, with the last date at the Wembley Arena on 27th November, tickets for which range from £28.50 to £60 - available now.

Tickets for the Royal Albert Hall will be available here, going on sale tomorrow (Thursday 13th May) at 9:30AM, priced from £25 for gallery standing, £35 for circle seating to £60 for floor seats.