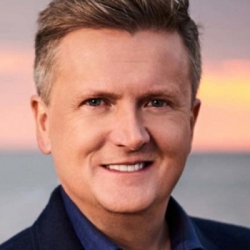 He was the biggest and unlikeliest name in pop back in 1985 - most stars on Top of the Pops in those days had half a ton of make-up on and crazy skirts made from three miles of netting, and that was just the men! Aled Jones was a 12 year old schoolboy when he hit the big time with the moving song "Walking in the Air", but it wasn't a hit until three years later - the rest is history. Or is it?

A couple of years later his voice broke and his recording career turned into occasional show-work and TV presenting until the early 2000s when Aled released "Aled" (nice title) and his new baritone proved to be another success. I suspect there may be another new album in the pipeline, especially running up to Christmas.

It has been a while since he toured the UK [four years, in fact - Ed], in fact his adoring Aussie fans have seen him more than we have, but that's all about to change with new autumn dates confirmed. He begins in Liverpool on the 22nd November and continues to large venues in Eastbourne (25th), Bournemouth (26th), London Cadogan (29th), Manchester (30th), Gateshead (3rd Dec) and finally it's back home to Wales on the 10th Dec, when he will play at the Cardiff St David's Hall.

Tickets go on sale at 9am this Thursday (13th) and Friday (Newcastle and Eastbourne) and will cost around £25 + fees.